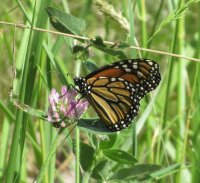 The first Monarch butterflies arrived in our field of milkweed in 2021 on the 6th of June. Not only were they early, there were three of them at the beginng. Soon more joined them and by the 18th we found our first egg in the field. There was a caterpillar on the 22nd of June.  Counts of Monachs seen in the field were done semi-regularly. and as of July 15, there were 21 Monarchs in the field.

The first Monarch pupated on 8th of July and the first eclosure (emergence from the chrysalis) occured on July 19.  The summer had adequate moisture and the milkweed grew well. It flowered in late June and early July. The number of Monarchs in the field remailned around 20 for most of the season until late August when there was an increase but not as much as seen in previous years. The chart below (click on it for a larger image) shows the whole season.  At the end of September, I did a survey of 75 milkweed plants across the width of the field and found only one chrysalis and one 5th instar caterpillar: I saw 22 adults at that time.  The next count on the 5th of September was 51 and by the middle of the month peaked at 61. In the next week the number present dropped dramatically until we were only occasionally seeing one or two Monarchs. These were probably coming from the few chrysalis still hidden near the field. On October 11, we saw the last Monarch.

During that survey, I noted that most of the Monarchs were nectaring, and mostly on the abundant goldenrod in the field. It seems they are bulking up for their flight south. During that flight they will continue to feed on nectar and increase their weight to live through the winter in Mexico, when they will have no available food. 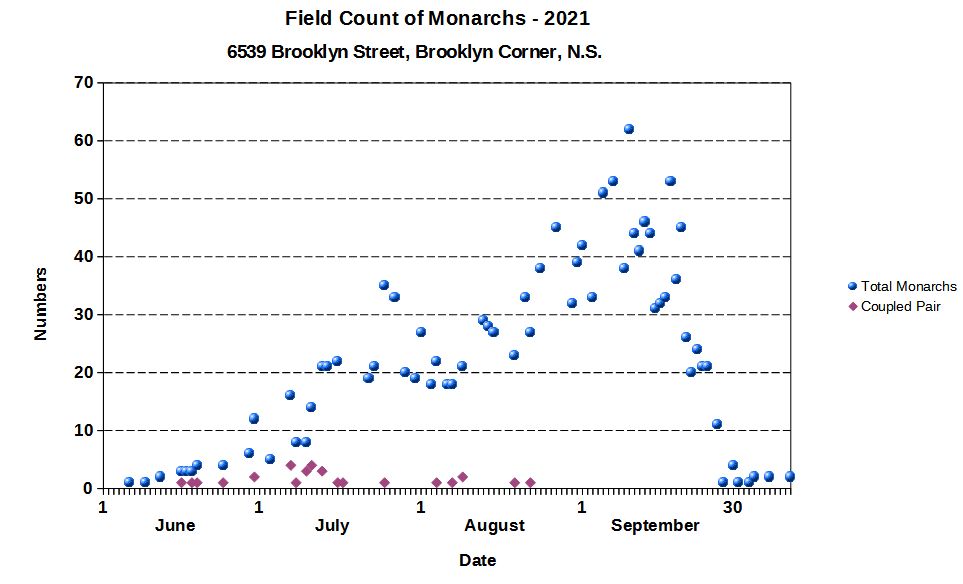