by Larry and Alison Bogan

This year was an excellent year for the population of Monarchs although not as great as 2018 which was the best in our experience.

Our 2 ha field is full of Common Milkweed (Asclepias syriaca) and this year was sprouting by mid-May. It is a perennial and its roots over-winter. The damp spring helped growth and by the time the Monarchs arrived the plants were large. The Monarchs, however, prefer to lay eggs on the small, fresh growth so in late June, I mowed several patches in the field as well as some new pathways. These areas quickly came back in small milkweed plants and this is where we saw most of the eggs and caterpillars when we did our surveys. 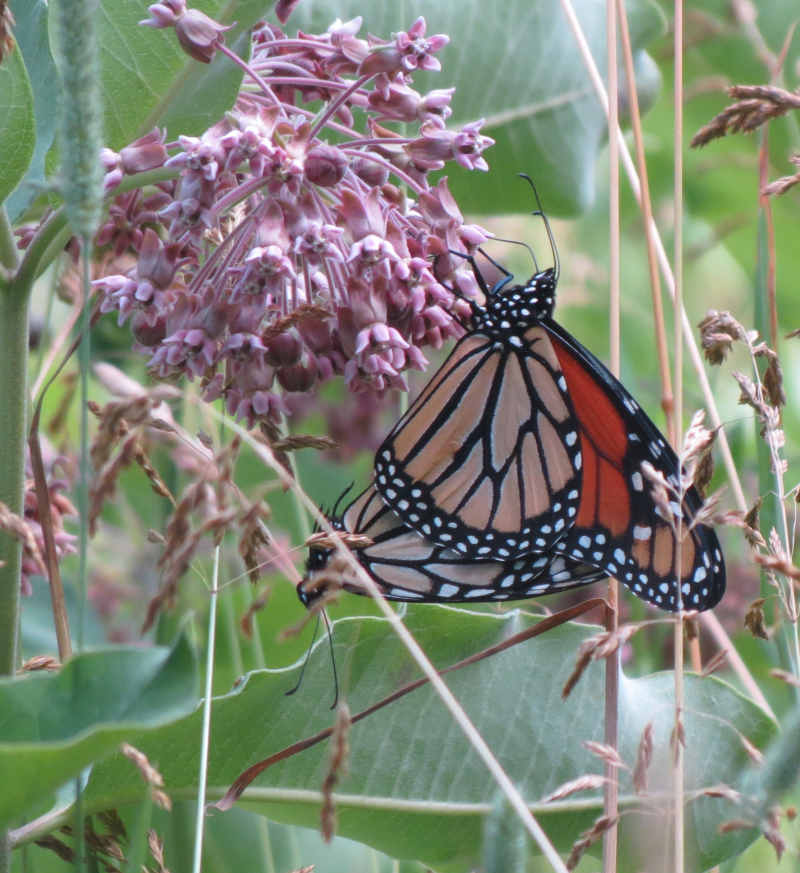 Our first Monarch (female) of 2019 arrived on June 8th and other sites in Nova Scotia saw their first Monarchs about then. However, there were only scattered numbers and we were lucky to see that Monarch stay around for the next month. We found a couple of caterpillars (probably laid by her) in our field of milkweed; this pupated on the 17th of July and eclosed on July 30th and 31st. We found few eggs in this period and the first only on the 22nd of June.

The early June arrivals were not the main migrating population. Most Monarchs arrived between July 7th and 17th and by the end of that period we had 12 or more Monarchs residing in our field and the egg laying picked up dramatically.

Nova Scotia is at the far North-east limit of the Monarch migration and it takes two or three life cycles for the butterflies in the spring to reach us from their over-wintering area in Mexico. This year we had a cool, wet June along with the New England states through which they must pass. As a result most of the breeding population arrived later this year. (see http://monarchwatch.org/blog for more details)

The milkweed blossoming peaked in mid-July, just as most of those Monarchs arrived. There was lots of nectar for their activities. In the evening before sunset we would find 5 to 15 Monarchs frolicking over the sunny part of the field as if they had finished the work for the day and it was time to have some fun. We had more breeding Monarch arrive than we did last year but those last year arrived at the end of June.

In the past Alison and I have protected as many eggs or larvae as we could to help build the population. However, we have limits and there is some evidence that reared Monarchs are not as successful as wild ones at migrating back to Mexico. The latter fact has caused Monarch Watch (http://monarchwatch.org) to recommend preferentially tagging wild Monachs and only larger ones. Following these recommendation, we shifted our efforts from rearing indoors to monitoring the breeding in the field. Alison found chrysalis in the field and flagged them, She found so many she used up her 50 flags quickly.. She monitored them daily and rescued any that are in danger. I made regular counts of adults in the field using a standard walking path to measure numbers coming out of the field. 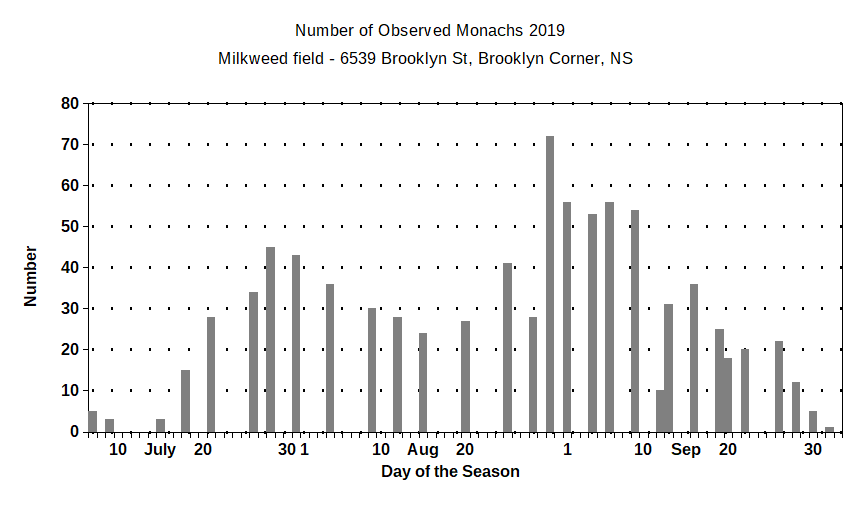 In 2018 the huge increase of Monarch butterflies in our field began in the first week of August while this year it was the third week. Monarchs stop breeding about mid-August and last year the new Monarchs stayed in the field and laid more eggs to create another generation. This year the Monarch population increased after they become sexually inactive and begin to migrate south so there were no second generation in 2019.

We reared Monarchs in the house but not the number we had last year. They were feed full milkweed plants kept in water for freshness and confined to the plant or a large screened in cage. They were allowed to pupate on the plant or cage. We released 299 Monarchs of which we tagged 99 of them. 142 of the releases were considered wild since they were from chrysalis rescued from the field and had spent all there caterpillar life in the wild.  The sex distribution was more uneven this year since there were 162 males and 137 females released.

Again this year we measured the fore-wing length of all our Monarchs released and used this to tag the larger ones. There is the usual 'normal' spread of lengths with the mean being about 52 mm. We noticed that as the season progressed we had fewer large Monarchs and in the second graph below this is indicated by the negative slope of the line fit to the length data versus day of the season. 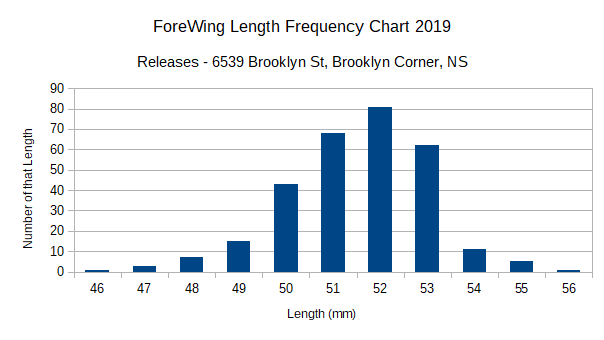 Mission Monarch (http://mision-monarch.org)., is run by the Space for Life Insectarium in Montreal, and is a continent-wide citizen science program documenting the monarch’s reproductive success. The program is part of an international research and education effort aimed at saving the migratory populations of this endangered species. I have been participating for the last four years and encouraging other naturalists in Nova Scotia to get involved.

During the summer, we survey milkweed plots in our areas for the life stages of the Monarch butterflies. Each year, extra effort or a 'blitz' is scheduled at the end of July and that is when most observations are done. as part of a continent wide program

I surveyed 20 Common milkweed plots this year and found 1 or 2 Monarch butterflies at most of them with at least eggs and small caterpillars. This year because of the late arrival of the majority of the spring migration, Monarchs were mostly in the egg stage at tjat time. The results indicated a good year overall and not just at our field.

I have extracted Mission-Monarch data for all the surveys in Nova Scotia for this year (1 July to 3 September). The results are:

It is encouraging to see more observers visiting more sites this year and the success they had in finding Monarchs. Their results show that there was a widespread breeding of Monarchs in Nova Scotia in 2019. For news of the success of the Monarchs this year follow the reports of Monarch Watch (http://monachwatch.org).