The first Monarch butterfly probably visited our milkweed field around June 12, 2018 and layed at least one egg. We found the caterpillar of that egg after we saw two Monarchs arrive on 3 July 2018. Within a week we had about 10 Monarchs resident in the field.  After that collection of eggs and larvae begain and we established our feeding and protection of Monarchs inside.  These ten (perhaps more) was the largest laying group we have had in all the years of rearing Monarchs.  They continued to lay all through July.

The June caterpillar became a Monarch butterfly on July 11 but the first of the continuous flow of emerging Monarchs started on August 1st. This population of Monarchs did not migrate but stayed in Nova Scotia and our field to establish a second generation of Monarchs which stayed and layed more eggs. During the month of August we released 264 butterflies.

During routine surveys of Monarch butterflies by walking the perimeter of the field, counts were over 50 all of August and reached a peak at 85 on the 15th.  When the Monarchs began to migrate at the begining of September the count dropped down to about 20.  The following graph shows the trends of the counts. 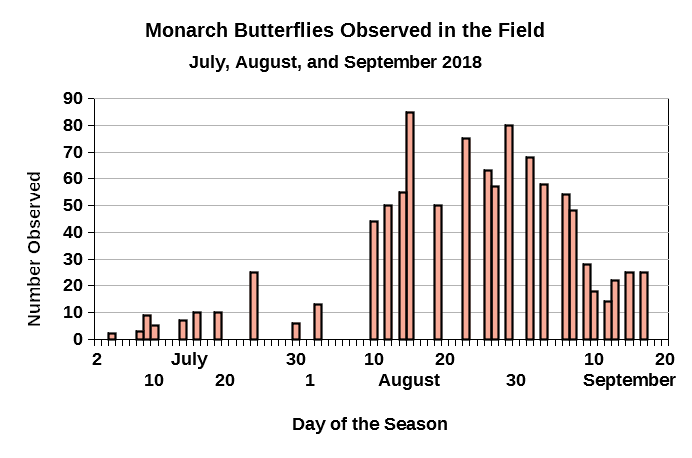 Eggs and caterpillars were collected during July and those emerged and were released in August. Laying continued by the influx of new Monarchs through the middle of August. The following graph shows that we had releases of one to 18 butterflies every day and accumulated a total of over 370 to date (19th September). 140 of those released were from chrysalis collected from the field. The latter was done to check the health, size and sex of the Monarchs. 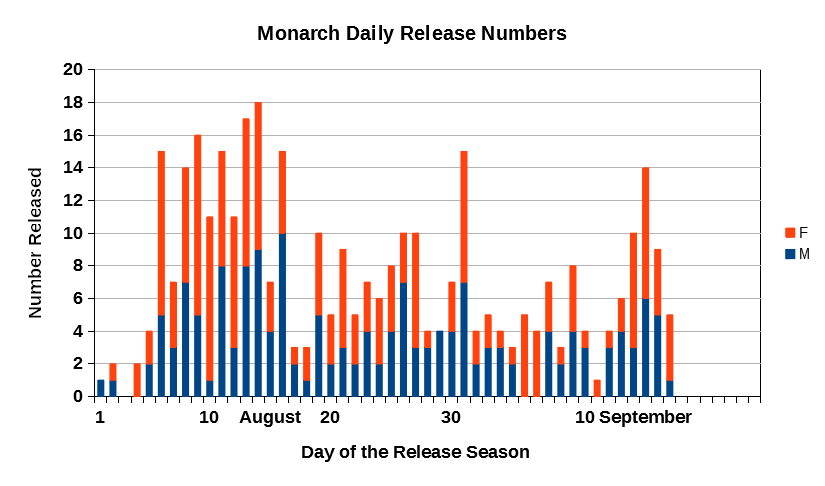 On the 13th of September, a  Natural Resources Environment Technology class from the Lunenburg campus of N.S. Community College, visited our field and were introduced to the Monarch life cycle and activities to rear them.  The class did a survey of four 100 m2 plots in different areas of the field.

Their results showed that the mowed areas are more attractive to Monarch, with many more caterpillars and chrysalis found in those two areas. (click on the area to see the results of the counts) - The totals found during a 1/2 hour search was 69 caterpillars, 4 chrysalis, and 12 butterflies.

This year in order to select the larger Monarchs to be tagged for the migration to Mexico, we measured every one we released. The distribution of measurements shows a range from 46 to 56 mm for the length of the fore-wing. The average length is 52.4 mm. 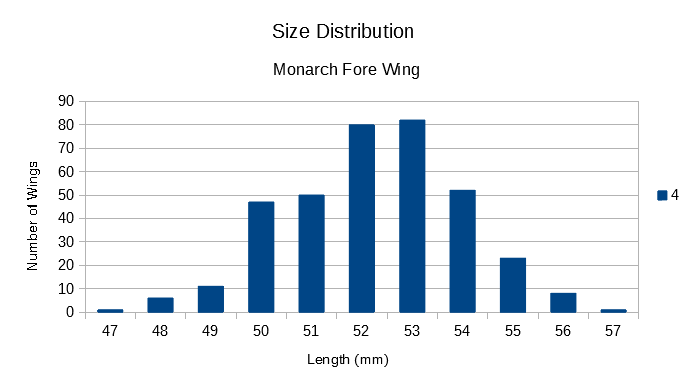