In the last class of Recent Discoveries in Astronony, we discussed dark matter and in one example, the total mass of the galactic cluster Abell 1689. The total mass and hence the amount of dark matter was determined by using the lensing of distant galaxies beyond the cluster.  The question was asked how the astronomers knew the distance to those galaxies and I did not have the answer.  The distance is needed to do the calculation of the mass causing the gravitational lensing.

There have been many research papers determining the mass of A1689 (as it is called for short) using several techniques, usually involving gravitational lensing of background galaxies. There is strong lensing near the center of the cluster and weak lensing in the outer edges. The arcs seen in the image below is due to strong lensing while the distorted (elongated) background galaxies are an effect of weak lensing. 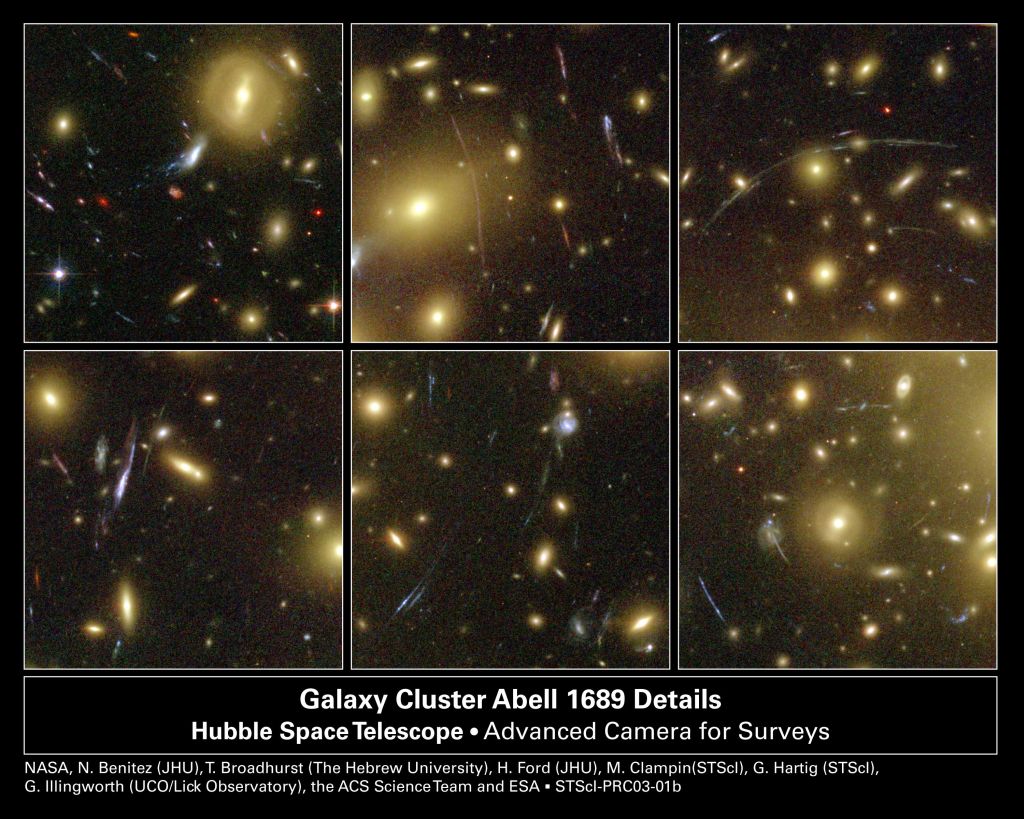 In the paper GRAVITATIONAL LENS MAGNIFICATION AND THE MASS OF ABELL 1689 by Taylor, Dye, Broadhurst, Benitez, and Van Kampen in 2005, they investigate the weak lensing. There is not a single source of light in the background but a whole cluster of galaxies.

To get the distance from the color, astronomers use the expansion of the universe.  All galaxies are moving away from us and the farther away they are the faster they are traveling. The light coming from them is shifted to longer wavelengths (red shifted). For the best measurements, astronomers look at the spectrum of the light and measure the shift in spectral lines.  However, the whole spectrum of the light we receive from the galaxy is shifted to the red and it color is reddened. By measuring the color, the distance can also be determined but with less accuracy than with spectroscopy.  The amount of the red shift is specified by the symbol, z .Which for small z is equal to the ratio of the speed of recession and the speed of light.  So a z = 0.18 means that the galaxy is moving away at 18% the speed of light. 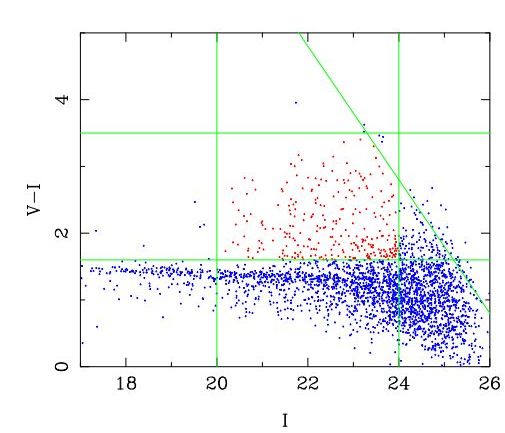 By using the data from other astronomical surveys of galaxies, they determined the redshift and hence the distance to the background galaxies at about z = 0.96 (1660 Mpc away).  The distance to Abell 1689 is z = 0.18 (630 Mpc away). [Note: these distances are those when the light left the galaxy]  The larger the red shift the greater the distance from Earth. They identified the background galaxies and the image belows indicates their location with open circles. The solid gray circles are the location of A1689 cluster galaxies.  ( Mpc = megaparsec = 3,260,000 ly) 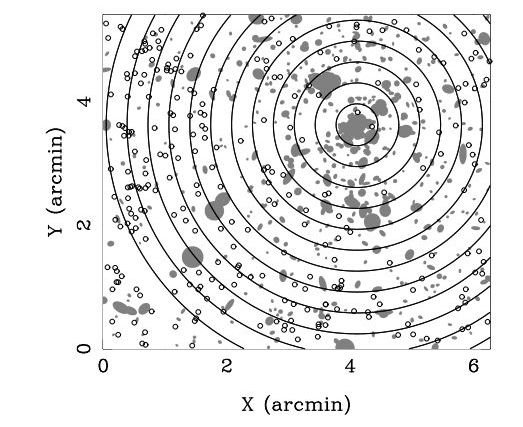 The next step involved extensive calculations and modelling of the cluster and its hidden mass. It is far to complicated to discuss here. The modelling of the lensing over the whole image area yielded a 2d distribution of the mass causing the gravitational lensing. That is shown below by contour lines. 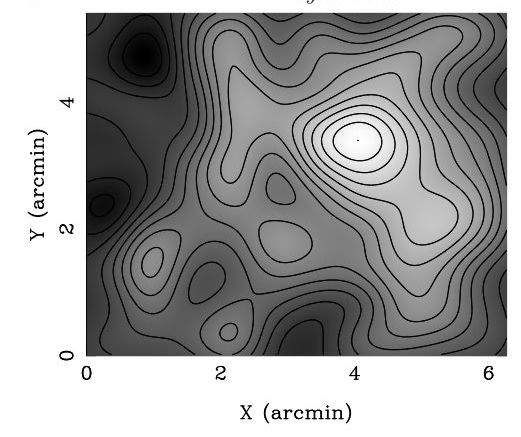 The Abell Cluster is about 1.7 Mpc is diameter and shown in the plot above, subtends only 6 arc minutes in angle (1/5 the angular appearance of the full Moon) so the size of the gravitational bending of light is on the order of a few minutes of arc.